The Crucifixion by Antonello da Messina is an extraordinary painting in the Museum voor Schone Kunsten in Antwerp, but since the museum is currently closed for restaurations some of the most important works are wandering around.Antonello (c.1430–1479) is a key figure in the history of European painting. How it happened we don’t really know, but without any doubt he played a major role in the introduction of oil painting in Italy. He is sometimes called the Italian Jan van Eyck, a somewhat curious nickname, as perhaps he should be called the Italian Robert Campin. There is no evidence that he has been to Flanders to learn about oil painting. More likely he came to see Flemish oil paintings in Naples when he studied there with Colantonio (Niccolò Antonio). Possibly he met Petrus Christus in Milano and learned some of the technicalities of oil painting with him. Petrus was one of the most important disciples of Jan van Eyck, who had come to Italy to study Italian techniques of painting, such as perspective, foreshortening and other trickeries of two dimensional representations of the three dimensional experience. Most certainly Antonello went to Venice in 1475-76 where he befriended Giovanni Bellini. The Bellini’s (including father Jacopo and brother Gentile) were the fountainheads of Venetian painting, but it was Giovanni who quickly got into oil, which became his preferred medium and which he used to great advantage.

The painting shows Jesus on the cross, with on his sides the good (Dismas, on the right of Jesus) and the bad thieve (Gestas, to his left). Note that the thief on the left side of Jesus is still alive, which we see by the pinkish complexion of his skin, whereas Jesus and the penitent thief have a paler complexion and have already died. 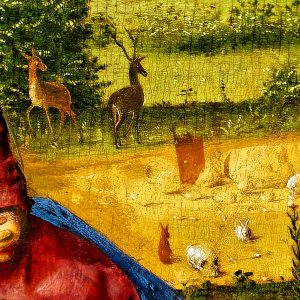 Beneath the the cross we see Mary the mother of Jesus and St. John the evangelist.
It’s a smallish painting, about 60×42 cm., but there is a whole lot of detail to see. To start with the city in the background, which is supposedly Jerusalem. We also see a lovely blue lake set in a hilly landscape.
On the ground nearby there are several skulls and many bones, as the place of the crucifixion, Golgotha is where such executions took place. And then there are the deer and the rabbits. 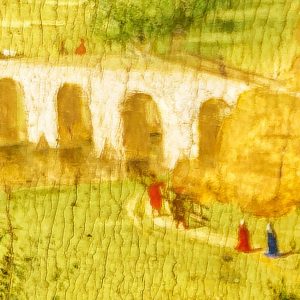 In the background there are two men carrying a ladder, apparently they are going to take Jesus down from the cross. They seem to be follwing two figures, one of whom would be Mary, who appears twice in the painting then. If you have a look at the full painting above you realise the detail is really almost microscopic. Anyway, the craquelure blurs the image, it must have been more precise originally. In many ways this picture reminds the illuminated manuscript tradition. But with the use of oil and the somewhat larger size than a manuscript page we get a zoom effect that is so typical of our visual cognition. We can effortlessly, smoothly and unnoticeably shift from overview to detail, and even see both at the same time “from the corner of the eye” as it is called erroneously. Apart from the group with the ladder we also notice the way the trees are painted in the most excrutiating detail. Below we see how skulls and bones are lifelike, a lower jaw, and some creepy animal coming out of an eye socket. And then there is the owl. Supposedly symbolising the sinner who turns away from faith just like the owl turning away from daylight. 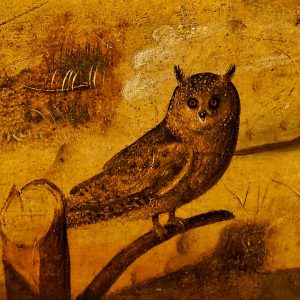 It seems the interpretation of the owl as symbol of the sinner is based on an article by Zuiddam. But the symbolism of the owl is a complex matter, as that same article clearly demonstrates. I think it is a fallacy that artists, now and in the past, worked with fixed and clear-cut categories. The owl is this or the owl is that. Why can’t it be both, and a host more things? Artists have a temperament that allows them to play with meanings. They are not scientists, nor clergymen, although some may have been and be professionally rigorous and profoundly religious. 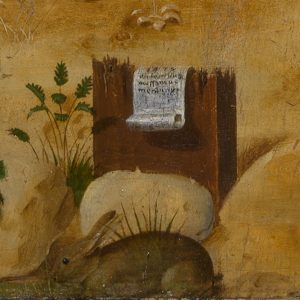 On a broken cross from an earlier execution there is paper with the text: 1475, Antonellus messaneus me pinxit — 1475, Antonello da Messina painted me. The rabbit (and there are more in the background), may well refer to Easter, the resurrection. Of course, the fertility symbolism of rabbits and eggs have nothing to with resurrection. But then the amalgamations that take place in religious beliefs is not based on logic, in the same way as artistic processes are not.