The first stage of post processing is weeding out the useless or superfluous shots. Bracketing is an important factor, but there can be multitude of reasons like sometimes shooting multiple shots are made to get the best focus. Once rid of the surplus selecting some of the best shots is the next job. I still do this preliminary work in Aperture. What a pity Apple abandoned it. Aperture loads the pictures quickly and to sort them there are many options; stars, flags, tags and more. After getting rid of the useless pictures I keep the remaining ones on an external hard disk of 2 TB, of which I also make a second copy. Files are organised in folders with a hierarchy of date: year, month, day and some additional information in the title. Like this: 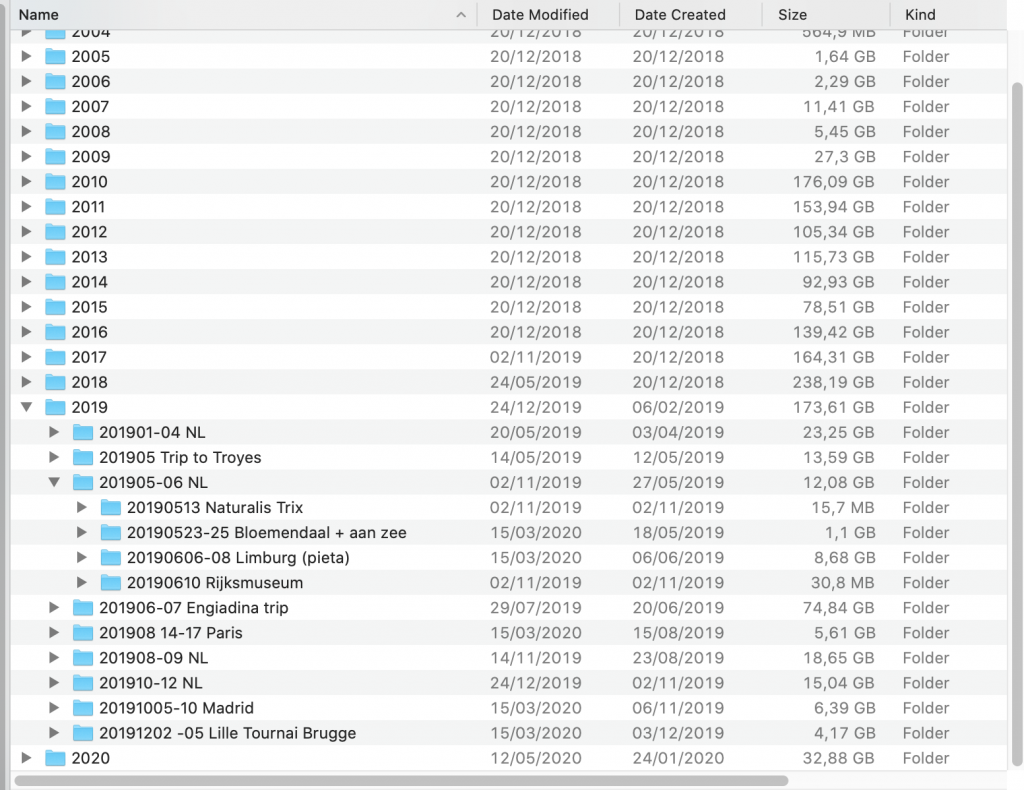 Aperture stopped working with the arrival of Catalina. However, Tyshawn Cormier’s Retroactive will make it work again! So far Aperture the only program in which you can really classify and search. For instance, if you want to see all the images you have taken with your Canon 7D Aperture will do that. Or with your 15-45mm lens. Perhaps Lightroom can do that too but I avoid subscription software.

The next stage is DxO PhotoLab, which starts out by doing its basic thing, correcting for camera and lens. In addition it can be useful to do some tweaking on vibrancy, sharpening,  clearview and de-noise. Most of the time the horizon has to be straightened, often perspective has to be corrected and then there is cropping. Oh, by the way, everything is shot in RAW, but after doing some tweaking a version copy is made in jpeg. And next the pictures may wind up on this site.

I have used Photoshop a lot and still occasionally do, having a very cheap license as a University scholar. But, as said above, subscription software is not my favourite system. A program I really love is Affinity Photo, especially since it can handle all sorts of unusual stuff like focus bracketing, HDR and stitching photos for a panorama. And for the rest it does a lot that Photoshop does. The closest you can get to Aperture is Exposure, really very pleasant as a digital asset management system, but for image processing not as refined as DxO photolab. I liked Luminar when it was released and it still has some handy tools to quickly make your pictures look spectacular, but it’s very flawed and they don’t really respond to feedback. I think you should always possess GraphicConverter, absolutely a powerhouse when it comes to getting deep into the entrails of photography. As the name says, it has most thinkable conversion options, but also for EXIF, IPTC and advanced processing it is unequalled. A relatively new program is Camera Raw, which has some amazing perks. It is available for MacOS and iOS, syncs seamlessly and reads directly into the apple photos library. Since it reads RAW on the iPhone you can use that for making backups in the field or on holidays. Another interesting thing is that it works with finder tags rather than using a proprietary keyword system. GraphicConverter can also do that, and the obvious advantage is that spotlight and the finder recognise the tags.

Apple photos is great for everything quick and dirty: it has quite good editing options, and you can easily publish your photos in shared albums. However, the resolution is limited, about 3MP, which means taking photos with a medium to high end camera is a waste.